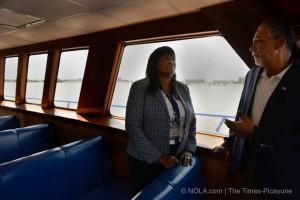 For most Americans, Durban, South Africa does not immediately evoke comparisons with New Orleans. But a delegation of Durban politicians, tourism officials and business development experts suggested during a visit to the Port of New Orleans on Thursday that the two cities are very much alike.

In fact, one might even call Durban the New Orleans of Africa.

“I think it is a very apt comparison,” said Steve Mkasi, head of the Durban Mayoral Parlour, as a fireboat carried the group up the Mississippi River. “We feel like we relate to the people of New Orleans, without even really knowing who they are.”

The delegation had come to New Orleans to celebrate the 20th anniversary of the Essence Music Festival. But they also came to learn about the city’s business infrastructure, and to investigate how it manages to draw tourists during the hot off-season months.

“Durban is the No. 1 tourist destination for South Africa,” said Peter Bendheim, a project executive for the Durban Tourism Unit. “But we could be better known globally. We can learn some things from New Orleans.”

The delegation arrived at New Orleans Louis Armstrong International Airport at 4 a.m. Thursday (July 3). Before their departure Monday, they plan to meet with Mayor Mitch Landrieu, attend the Essence Fest, walk through the French Quarter, and tour the Lower 9th Ward, among many other activities. But first they wanted to get a look at the port.

“Africa has a new maritime sector,” said the Deputy Mayor of Durban Nomvuzo Shabalala. “It’s one industry that can create a lot of jobs.”

New Orleans is one of Durban’s 15 “sister cities” around the globe, a list that includes Rotterdam, Netherlands; Bremen, Germany; and Chicago. But of all these sisters, New Orleans and Durban may be the closest in spirit.

For one thing, they are both big port cities: Durban boasts the largest port in Africa, and New Orleans is the sixth largest in the United States. The two cities are also known for their friendly residents, warm climates, and outdoor lifestyles, Bendheim said. The food shares some commonalities, too.

As Bendheim explained, the British colonialists transported large numbers of Indians into the region — then called the Natal Colony — to work on sugarcane plantations in the mid-19th century. The Indians’ presence introduced a spice to the local food that Bendheim, who has visited Louisiana many times, compared to Cajun cuisine.

“The food in Durban is probably as close as you can get to the food of New Orleans outside the country,” he said.

Durban is also a hot spot for music. The annual Durban Jazz Festival has drawn acts like trumpeter Hugh Masekela and singer Erika Badu. Mkasi spoke passionately about Louis Armstrong and B.B. King, who he suspected was from New Orleans, though he wasn’t sure (King was born and grew up in Mississippi).

“For us at least, B.B. King’s spirit is aligned with the spirit of New Orleans,” he said.

Moreover, both Durban and New Orleans have associations with the word Zulu, though what people understand by that term differs in each city.

Ernest D. Kelly, the president of the New Orleans International Arts Foundation, who served as the delegation’s guide, was sitting in the fireboat’s cabin. He described a recent visit to Goodwill Zwelithini kaBhekuzulu, the reigning King of the Zulu nation in South Africa. Kelly had brought along James Andrews and members of the Crescent City All-Stars, who performed in the king’s palace.

“I explained to kaBhekuzulu that we have a different kind of Zulu King in New Orleans,” Kelly said. “He was not aware of it.”

In South Africa, the Zulu people are known for weaving a type of colorful beaded jewelry. While visiting the Zulu King, Kelly suggested an unconventional trade partnership, in which members of the Zulu Social Club would buy jewelry from the Zulu people. Kelly hoped this could not only help jump-start the Zulu tourism industry in Durban, but also lead to future trade deals between the two cities.

“The king liked the idea,” he said. “But the Zulu Club isn’t that educated in the culture. They don’t see the benefits for both sides.”