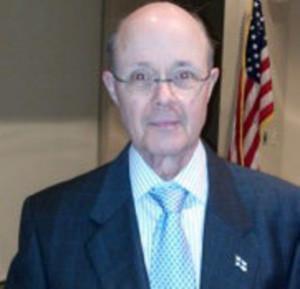 Finland, a country in northern Europe famous for its scenic beauty, took center stage at the Eastbank Regional Library in Metairie March 25 when Philip Claverie, a New Orleans business transaction lawyer and the honorary consul to Finland, spoke at the monthly speaker series of the World Affairs Council of New Orleans.

“Finland is a small country that has a population of a little more than 5 million people,” said Claverie, who has been the honorary consul for 11 years. “But it has such a great story to tell. And I get a great deal of pleasure out of telling its story.”

Finland has carved out its own identity in the world by playing a key role in peacekeeping and mediation as well as the development of green technology, Claverie said.

“Finland is also the least corrupt country in the world, and its public officials are highly respected,” Claverie said. “Finland also has the best secondary education system in the world, and 40 percent of its political leaders are women.”

As the honorary consul for Finland, Claverie works to promote business and cultural relations between Finland and Louisiana, Mississippi and Arkansas.

Other monthly topics of the World Affairs Council of New Orleans at the Eastbank Regional Library have included Russian foreign policy and the Olympic Games and China’s foreign policy.

“We want to attract people from the community to our monthly meetings so they can develop an awareness of international issues,” said Alla Rosca, a board member of the World Affairs Councl of New Orleans and a professor at Tulane University.

Bruce Hallila of River Ridge was among those on hand for Claverie’s presentation about Finland.

“My father was born in Finland and came to the United States in 1926,” Hallila said. “I want to learn more about Finland and its history. I was especially impressed to learn that 40 percent of the political leaders in Finland are women.”

“My father was born in Finland, and I’m working on my Finnish citizenship,” said Ferguson who is a native of New Jersey but now lives in New Orleans. “I’m trying to learn as much as I can about Finland.”

Bob Mangham of Old Jefferson spent two weeks in Finland last summer, and he has been interested in all things Finnish ever since.

“Finland is an interesting place, and I’m interested in the country’s history,” Mangham said.

Paula Eagan, also an Old Jefferson resident, said her grandmother immigrated from Finland to the United States in 1903.

“I think it’s fascinating that Finland has been able to stay neutral all these years,” Eagan said.

For information about future events of the World Affairs Council of New Orleans at the Eastbank Regional Library, contact Chris Smith, adult program manager for the library at (504) 889.8143 or wcsmith@jplibrary.net.

Earl Hodges writes about people and events in the heart of Metairie. He can be contacted at earlhodges@msn.com.